This article’s  VC++2013 project(Code Sample 2)  shows the simple real time brainwave charting with using “neuroNicle API”. The purpose of this code sample is “how we can acquire the brainwave raw data from neuroNicle API and how we can handle real time processing”. To avoid the code complexity,  this project’s charting component is very navie and simple.  You can use more beautiful charting components or your own charting codes. This article shows the detail informations about coding flow with screen capture step by step. Although you are newbie in VC++2013  you can easily understand how to make VC++2013 general project and  how to use “neuroNicle API”. developing IDE : “Visual Studio Community 2013 with Update 4”

Tip : Visual Studio Community 2013  verson is a free and full-featured IDE. This is  better than Visual Studio Express Version. You can download here -> http://www.visualstudio.com/downloads/download-visual-studio-vs

This  section shows the detail steps for creating  VC++ project as SDI Type with most simple project’s options. The final ececuted program shot is as following.

This section includes very  basic routinal informations, if you are familiar with the Visual C++ project’s creation, please skip this section and go to next step2.

In this section, dialog is added to the project. The purpose of the dialog is to communicate with “neuroNicle API”. The buttons are placed in this dialog are to be used for calling the API functions. The final shot of the dialog is as following figure.

Now the class “CDlgMainControl” is added to our project and  you can see the default dialog shape is created in resource view.

Now, the  dialog shape is the following.

Add hanlder for all buttons

Now we set the CDlgMainControl as a Modeless as follows.

“neuroNicleAPI_SampleCode2View.cpp” as follows. The codes in constructor create the dialog  at the same time as creation of view instance.

Now we are ready to add code for using “neuroNicle API”. The “neuroNicle API” is a type of Dynamic Linked Library(DLL). The using method is the same as that of general dll – incldue the header file,  implicit link the lib file and place the dll file into folder which exist execution file.

1. Getting the neuroNicle API  files. 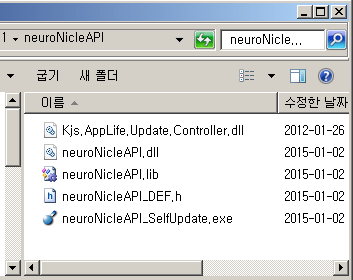 You should copy the following  three filess  into the folder which has a sample project’s execution file i.e. neuroNicleAPI_CodeSample2.exe.

You should copy the following two files to sample project’s source folder.

The following figures show the copied files into suitable folder.

1. Include API’s header file and Link the lib file.

Most important neuroNicle API functions are the following.

Call the function  OpenApi at first and then cal the OpenDevice  to communicate with specific neuroNicle device with a parameter LXDeviceID which is unique identification integer number something like 256 in the case of “neuroNicle E1” product. If your application going to close, call the CloseDevice and then CloseApi. In our project sample, the above 4 functions are called from the button click handler in the MainControl dialog class as follows.

Now run (ctrl + F5) the application and then click the buttons.

Set 1 of the  first parameter of OpenApi function means that show the API windows for debugging purpose. if you call the API functions in your program, the internal status can be seen the window’s list box.

Set 1 of the second parameter of OpenApi function means that run the process “Check for self -uodates for neuroNicle API” . neuroNicle API can be automatically updated with a new version or patch via network. If you using the neuroNicle API , there is no need to check new API version and  patch manually.

The  “Check for updates” window is the following.

add codes to “neuroNicleAPI_SampleCode2View.h” as follows.